My first installment of Tabletop Thursday, a segment dedicated to blogging about the differents my friends, family, and I play every Thursday.

This segment will talk about board games, card games, and the occasional Dungeons & Dragons game we experience while sitting around the table.

Today, I was joined at the table by my cousin, Aru, and my friend, Kilik. We played two different games at the table today.

You’re given a hand of 5 cards, including one Defuse card, which allows you to cancel out an Exploding Kitten card if drawn. There are cards with effects that will help you throughout the game (such as the “Nope!” card, which negates the last play your opponent did) and non-effect cards you can combo with other non-effect cards to further assist you to victory (such as creating a pair to take one of your opponent’s cards, a chance at taking their Defuse).

We played two games and the results were:

Kilik: 3rd in both games

The next game we played was Machi Koro, a tabletop game made in Japan.

In Machi Koro, you are a city mayor tasked to build up a successful town. You start off with a wheat field, bakery, and 3 coins. Through dice rolls, you earn more money so you can build more businesses which will help earn you even more money. A player wins by building all of their city’s key businesses: a Train Station, a Shopping Mall, an Amusement Park, and a Radio Tower. 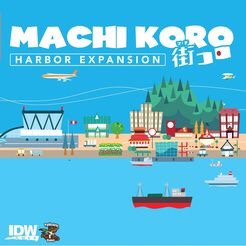 Since the three of us were experienced in the game, we added one of Machi Koro’s expansion boxes, the Harbor Expansion. This provided additional businesses to build, including 3 key businesses for the end game: City Hall (built for you for free), a Harbor, and an Airport.

The three of us played one game of Machi Koro. It seemed like an even game until Kilik and I started building businesses requiring higher rolls to activate while Aru stuck with building lower roll buildings. But through mass building Flower Orchards and Flower Shops (which Kilik and I joked about and said they didn’t grow actual flowers, but medicinal herbs instead), perfectly timed rolls, and stashing away money, Aru came out victorious. In the end, Kilik and I joked around again, saying that the “flowers” really did pay the bills. (If you don’t understand what the joke is, it’s probably best you forget about it.)

There will be no Tabletop Thursday blog next week due to scheduling conflicts. This segment will resume in two weeks (8/31). We will also resume our streaming of Tabletop Thursdays on Twitch. Check us out at: http://www.twitch.tv/azumayaaru and put faces to the gaming tags you see here!

Also, if you have any Tabletop games you want us to try out, post them in the comments!